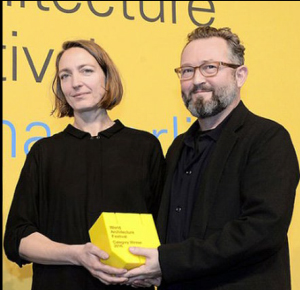 An outspoken and unusually thoughtful architect, Patrick Lynch has quickly risen from carefully crafted and compelling small structures through to large-scale commercial commissions and urban plans in a seemingly seamless transition, without losing any of the passion or intelligence of the earlier work. His extraordinary little house, Marsh View, a brick and timber structure which seems to huddle up against the warmth and certainty of its chimney, was published around the world and his London houses created a refreshing language of the ad-hoc, the found and the particular. Lynch Architects have recently been at work on major schemes, most notably a group of civic-minded commercial and cultural developments in Victoria, for which the Vicky handles were originally conceived. The idea was to reconcile the rigorous geometries of the square and the circle in a section which morphs from one to the other, giving a comfortable round grip but presenting the beginnings of a square section to the thumb as it pulls. Simple and surprising, the handle addresses and brings together two archetypes of handle design, the tube and the bar. Claudia Lynch then developed the concept with Patrick creating a complimentary lever handle.