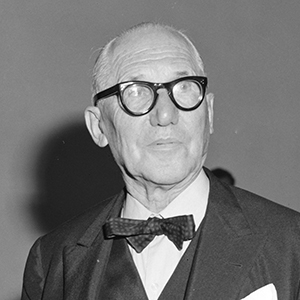 Le Corbusier (Charles-Édouard Jeanneret) was one of the defining figures of 20th Century architecture. Born in 1887 in French-speaking Switzerland, he was an architect, designer, painter, urban planner, writer, and pioneer of the ideas of modern architecture. Despite his array of innovative and admired buildings, his most influential act may have been writing his first book Towards an Architecture, and his subsequent role in founding CIAM ( Congrès Internationaux d'Architecture Moderne). Le Corbusier’s most important buildings include the Villa Savoye, Unité d'Habitation in Marseille, the chapel of Notre-Dame-du-Haut in Ronchamp, his plan and buildings for the city of Chandigarh in India and, the Dominican priory at La Tourette. He died in 1965.